THE SHOCKING SEQUEL TO “TROPHY HUNTERS EXPOSED: INSIDE THE BIG GAME INDUSTRY” … WHICH FORCED WWF INTO AN EXTRAORDINARY U-TURN…

MEDIA NOTICE: If you would like to interview Eduardo Goncalves about “Killing Game: The Extinction Industry” or “Trophy Hunters Exposed: Inside the Big Game Industry” please contact John Read on +44 (0)7774-476391 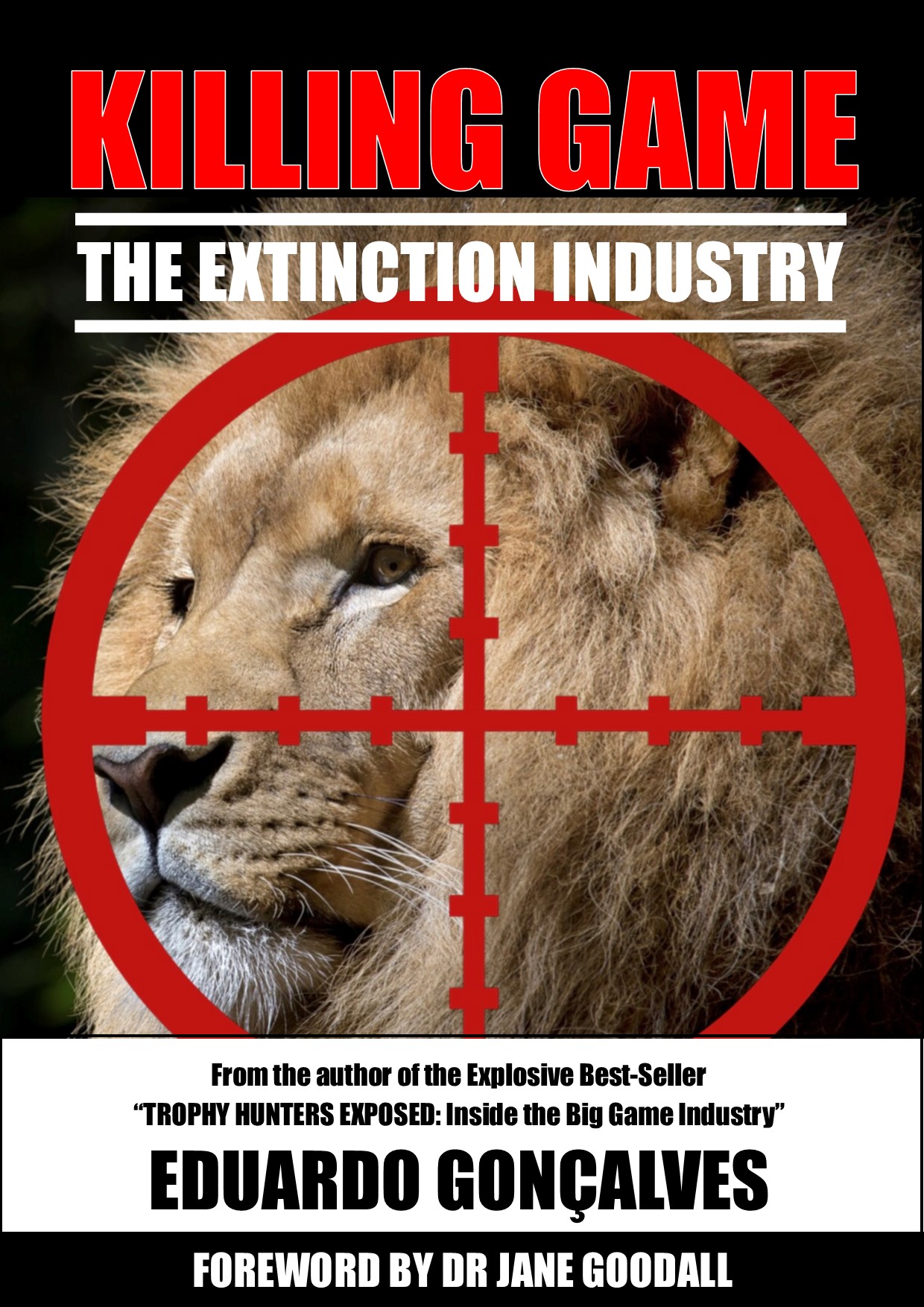 TROPHY HUNTING is putting some of the world’s most vulnerable animals on a FAST-TRACK to EXTINCTION.

That’s the shocking findings of “KILLING GAME: The Extinction Industry”, the brilliant sequel to the explosive best-seller “TROPHY HUNTERS EXPOSED: Inside the Big Game Industry” by award-winning conservationist and writer Eduardo Goncalves.

Launched on the 5th anniversary of the shooting of Cecil the lion, “KILLING GAME: The Extinction Industry” charts the calamitous COLLAPSE in LION POPULATIONS in recent years.

Goncalves reveals INTERNAL INDUSTRY records which show African elephants’ tusks are SHRINKING dramatically – due to the insatiable appetites of trophy hunters and poachers.

“Trophy hunting is leading to the extinction of a number of species. Scientific studies have demonstrated the links between trophy hunting and population declines. Yet exports of hunting trophies continue to increase. For the good of conservation, the days of the ‘great White Hunter’ should be brought to a close.”

“KILLING GAME: The Extinction Industry” reveals the huge numbers of WHITE RHINOS that are being shot by Chinese ‘hunters’ – thanks to a legal ‘loophole’ that lets trophy hunters kill rhinos for horns and other body parts.

POLAR BEARS have been shot for their GENITALIA and GALLS for traditional Chinese medicines. LEOPARDS are being killed in large numbers despite IUCN warnings their numbers are falling. CHEETAH numbers are now down to fewer than 7,000 – yet the EU still lets European hunters bring their trophies in.

It exposes some of the most HORRIFIC hunts of threatened species currently on offer – including CANNED TIGER and JAGUAR hunts in South Africa, and KANGAROO and ‘Frankenstein animal’ hunting on private American ranches.

The book documents WWF’s involvement with the trophy hunting industry, and how WWF-UK warned the government NOT to ban trophy hunting imports. After The Times wrote about the book’s revelations, WWF CHANGED ITS POLICY … and now says it fully supports a total ban on all Trophy Hunting imports.

After the furore which followed the shooting of Cecil the lion, the UK government promised it would stop British hunters from bringing back lion trophies – then quietly dropped the pledge. “KILLING GAME: The Extinction Industry” reveals that, thanks to this, hunters from the UK have shot at least another 50 lions…

“KILLING GAME: The Extinction Industry” warns that trophy hunting could help cause the WORLD’S FIRST BIG CAT EXTINCTION since the sabre-tooth tiger died out in pre-historic times.

“Virtually everyone agrees that Trophy Hunting is cruel and immoral,” says author Eduardo Goncalves. “We now have incontrovertible proof of trophy hunting’s devastating impact on wildlife. What more will it take for governments to finally act?”

REVIEW: Trophy hunters’ core argument for killing is laid to waste in a staggering new book – The Canary

“A lot rests on the hunters’ argument that their actions help communities and, as such, conservation. That’s clear in the fact that, more often than not these days, hunting advocacy groups brand themselves as conservation organisations. Gonçalves’ book throws that argument into severe doubt, not only in terms of the financial benefits of hunting for communities, but in relation to the direct impact hunting is having on species’ potential survival.

“In the book, Gonçalves notes a trophy hunter’s response to it on a forum called Accurate Reloading. The hunter said: We are done. There is no way we can rationalize what we do to those who read this book. The game is about over. That hunter may very well be right.”

PRAISE FOR “TROPHY HUNTERS EXPOSED: INSIDE THE BIG GAME INDUSTRY”

“The trophy hunting industry’s ‘conservation’ façade is comprehensively dismantled in this fast-paced, forensic investigation. The case for abolition of this archaic pastime has never been made in such a compelling manner.” – DAILY MIRROR

“Britain should ban the import of animal trophies. The UK is a nation of animal lovers, and should not tolerate their persecution. The idea of killing for fun those animals most at risk of disappearing from the wild in our lifetimes is an abhorrent one.” – THE TIMES

“If this book doesn’t get trophy hunting banned I don’t know what will. This is an incredible investigation that reveals everything the industry would rather you didn’t know.” – JUDI DENCH

“A society which allows sentient creatures to be killed for entertainment has serious questions to answer. ‘Trophy Hunters Exposed’ asks those questions and then answers them in devastating fashion.” – PETER EGAN

“It reveals the key players, lobbyists, donors, and how the industry is killing off wildlife. A must-read”. – RANULPH FIENNES

“If there’s one book to buy about animals this year, this is it. Trophy hunting is legalised animal abuse on an industrial scale. ‘Trophy Hunters Exposed’ tells us why we must abolish it. Now.” – JOANNA LUMLEY

“Minutely-detailed, reference-packed, ‘Trophy Hunters Exposed: Inside the Big Game Industry’ slams into trophy hunting with the force of a meteorite.” – CHARLIE MOORES, The War on Wildlife Project

“A book that’s bound to cause fury and denials by hunting organisations. But, with the names of trophy hunters, the exact tally of their kills, their cruelty and their Facebook boasts forensically detailed, it will be hard to rebut. – DON PINNOCK, Daily Maverick

“A stunning guide about Trophy Hunting and who lurks behind it” – MARK RANDELL, Retired Senior Police Detective, UK

“A gripping, terrifying and meticulous analysis of the misguided, corrupt, morally bankrupt domain of the global hunting industry’s perversion in the name of profit from animal cruelty and exploitation” – STEPHEN WIGGINS, International Wildlife Bond

Eduardo Goncalves is an award-winning conservationist and writer. He has been a consultant to WWF and the RSPB, and CEO of a major national animal welfare charity.

Eduardo was awarded the Animal Heroes Award for services to wildlife in 2019. A short film about Eduardo’s work – with endorsements from Kevin Pietersen, Stanley Johnson, Lorraine Kelly, Sir Ranulph Fiennes and Daily Mirror editor Alison Phillips – can be viewed HERE.

Proceeds from the sales of ‘KILLING GAME: The Extinction Industry’ and ‘TROPHY HUNTERS EXPOSED – Inside the Big Game Industry’ will be donated to the Campaign to Ban Trophy Hunting